If you are using Visual Studio 2005, you sure have encountered a new nifty feature called Code Snippets.

There are a lot of articles and blog posts surrounding this topic, so why another post? Well I’ll try to give give you a (hopefully) complete roundup on

I’ll describe the handling of Code Snippets in C#. In VB.NET Code Snippets behave a bit different, but since I am only using C#, I can’t tell you much about that.

Code Snippets are short pieces of reusable code for everyday use, which can be used in a very handy way.

Well, since Visual Studio 2003 you can write own pieces of code, which you can drag to the Toolbox for reuse, but using Code Snippets is A LOT sweeter.

You don’t have to use the mouse to drag them to your workplace anymore. Just type in the defined shortcut and press the TAB-key two times to insert a snippet. For browsing available Code Snippets you just press Ctrl+K,X or select Edit – IntelliSense – Insert Snippet… in the Visual Studio menu.

Also, you can define placeholders inside a snippet, which are replaced during insertion. You can take a look at a nice demo and how to by Jeff Atwood.

Create your own Code Snippets

Code Snippets are simply plain XML files, so you could write them in notepad with a little help of the Code Snippets Schema Reference. I would recommend taking a look at Snippy. Snippy is a free editor for creating and editing Code Snippets. Since the tools hosted on gotdotnet aren’t usually well documented, you might want to take a look at the overview at Visual Studio Hacks.

Ready made Code Snippets by other develolpers

There are some good locations on the web, where you can find ready to use snippets made by other developers.

First I’d like to point you to the snippets done by my colleague Roland. He did some for inserting Properties with Prefix Notation, Events, NUnit Test Methods, etc.

After that you should take a look at GotCodeSnippets.NET, where many user defined Code Snippets are hosted.

In VB.NET you find a big bunch of already installed Code Snippets for any circumstance. Microsoft just published the same snippets for C# as a free download. Stupidly the installation isn’t really that, what you want. In the C# Snippet Parity post by Jeff Atwood, you find a better way of installing, which brings me to the last section of this article.

Since Jeff Atwood wrote nearly everything I planned to write in his C# Snippet Parity post ;), I try to make this short.

Jeff wrote about a way to install the additional C# Code Snippets by Microsoft using a system wide approach and a registry file. I prefer a per user installation by the following reasons 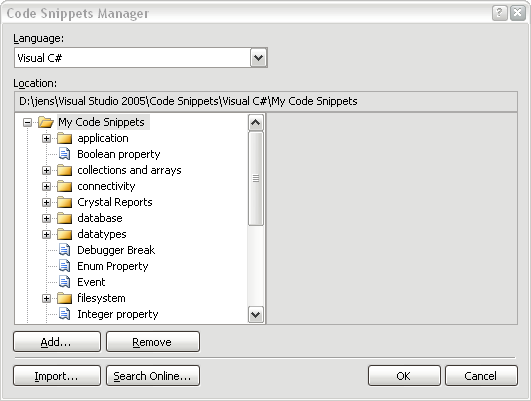 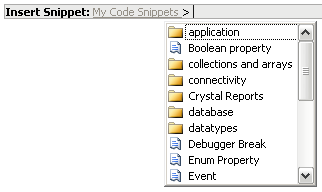 You can simply reorganize your Code Snippets using the Windows Explorer. Now, how easy is that?

Just a few installation hints, since some guys had problems with it:

The rest should be clear. If not, just take a look at Jeff’s post.

This article is also filed here.

Adding a Code Snippets path located on a network drive

Leave a reply Click here to cancel the reply